We use cookies for a variety of purposes, such as website functionality and helping target our marketing activities. Some cookies are essential, others help us improve your experience by providing insights into how the site is used. For more information, please visit our Cookie Notice.

Bishop’s Move, the family-owned removals and storage business, has added a stylish DAF 18-tonne to its growing fleet. The CF 290 FA 4x2 box van carries a retro-livery, modelled on the company’s fleet in the 1930s, as the family and firm celebrate 165 years of successful trading.

The latest truck was part of an order for 17 DAFs supplied on lease through Channel Commercials in Ashford, Kent. They join a Bishop’s Move fleet that numbers some 150 vans and trucks in total, operating either directly with the parent company or through its franchised operations. The arrival of the new DAFs pushes the marque’s dominance among vehicles above 3.5-tonne to some 90%.

Neil Bishop, current chairman and a sixth-generation founding-family member, said, “We have been shifting across to DAF for the past four or five years, as aftersales care levels dropped badly with our former preferred choice. This has been no hardship though, as the DAFs have proved a much better package. They are better value for money – including running costs as the Euro-6 engines bed in – and, compared to the old brand, we find far less goes wrong with the DAFs. Plus, our drivers love them and the dealer service network is well-distributed across the UK and always available should we need support.” 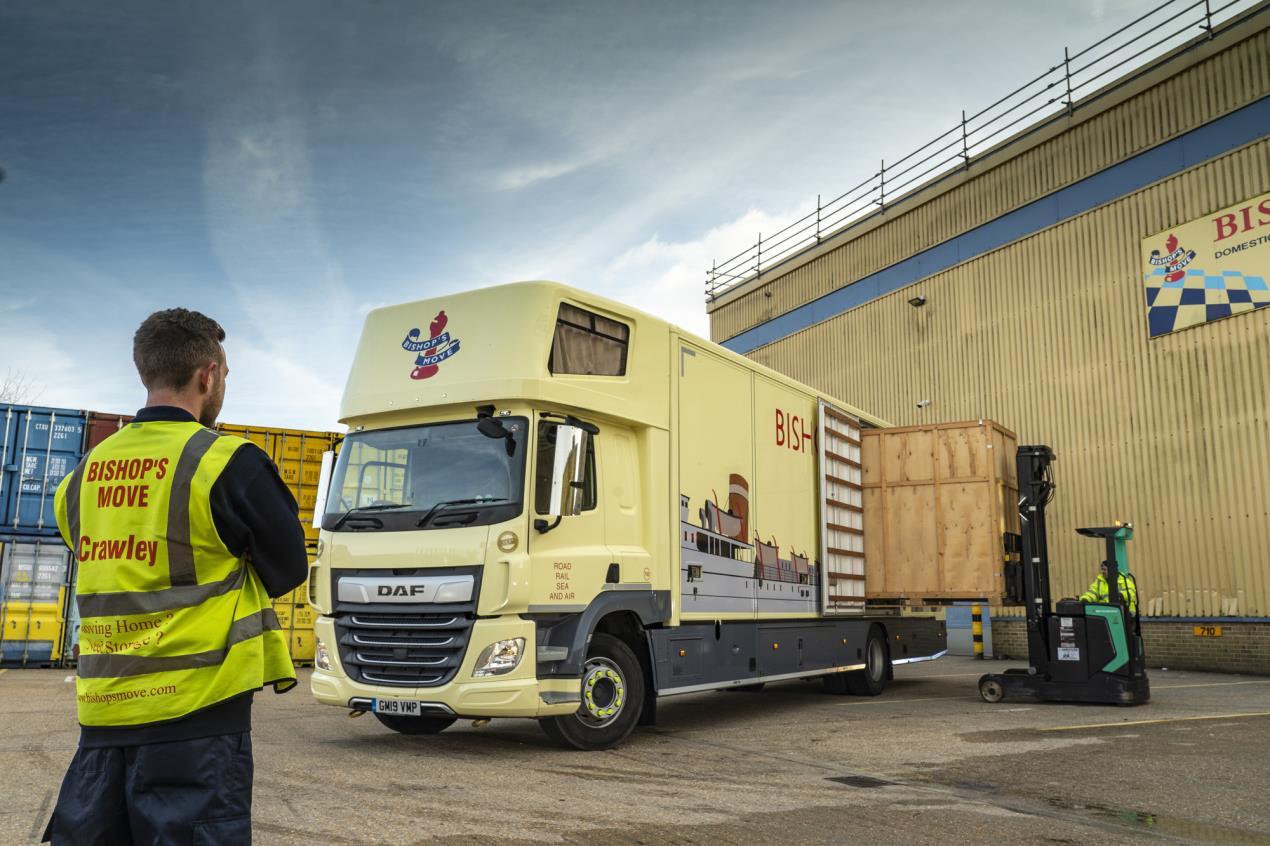 The new 18-tonne CF 290 FA, which has a 6.9m wheelbase, comes with a ZF manual gearbox, rear air suspension and a cab with twin-sleeper Hi Roof cab conversion built by SBR Specialist Coachbuilders. The cab itself has been specified with seating for a four-man crew when needed, with the arrangement also allowing a third crew member to sleep in the main cab area if required. Drivers and crew are especially important to Bishop’s Move, even more so than in traditional road haulage. Alongside detailed customer discussions, they also have to be experts in wrapping, boxing and getting heavy, often awkward loads out of properties and onto the trucks – and then off again and back into the ‘new’ property.

Along with the cab conversion, SBR built the special removal body for Bishop’s Move, which features fixed side doors on both near and off-sides of the truck as well as full side-skirts. Following a detailed brief by Neil Bishop, the bodybuilder produced the final design for the retro-livery as well, before applying it to the completed truck. A number of the firm’s fleet have also been fitted out with special internal padding and alarm systems for the movement of fine art and other valuable antiques, while others have high-performance tail-lifts. The latter used for the increasing number of commercial contracts carried out by the operator for major blue-chip companies, government facilities and the like. This mix of business has developed as Bishop’s Move reputation has grown, allowing it to cope more readily with the removals’ world’s traditionally seasonal profile for domestic moves. 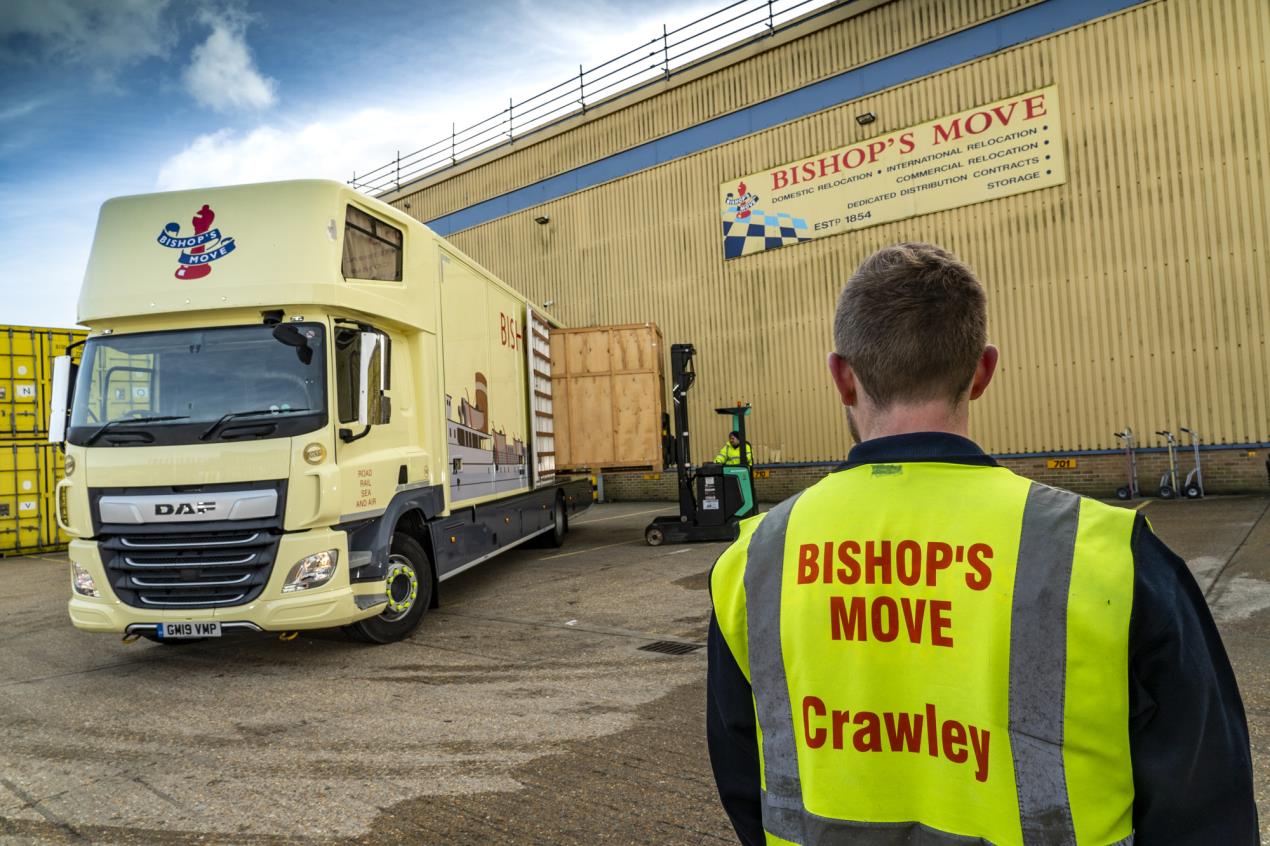 With so much urban work, the fleet is also changing in terms of vehicle spec to meet the changes on the ground. “We are finding congestion in the towns and cities, with cars often parked on both sides of every street a growing challenge,” says Neil Bishop. “It’s increasingly hard to manoeuvre, much less get comfortably positioned close to customers’ properties. Fortunately, with the ability nowadays to get 12-tonne capability out of trucks little bigger in most respects than an old 7.5-tonne vehicle, we have a solution we can live with. A further benefit of the move to DAF and the fleet upgrade is that the growing number of LEZ, ULEZ and other regional Clean Air Zones, are largely catered for by the newer trucks.”

The average first-life term for a Bishop’s Move truck is around ten years. The nature of the business is such that a truck might do no more than three or four miles a day for half the week, and over 300 for the rest. The net result is that, even after ten years, the trucks will have relatively low mileage, and as Neil Bishop notes, “There are always buyers for good quality used removals vehicles. It’s an industry that spawns any number of one-and-two-man operations, and because everyone knows we really look after the trucks, we can move them on comfortably and confidently.”

There are currently no comments for this page

To be the first to leave a comment please complete the form above and press Submit.

Great work from Sovereign Transport Services, who are supporting the Owen McVeigh foundation with these two very sp… https://t.co/JYYw0u49W1

about a day ago

Great work from Sovereign Transport Services, who are supporting the Owen McVeigh foundation with...

Have some fun with your friends by using our new #DAF #GIFs! Available for you to share on Twitter,...